The first meeting of Jan Gehl with Lublin was the conduction of international archtectural workshops concerning the future of Litewski Square in Lublin. 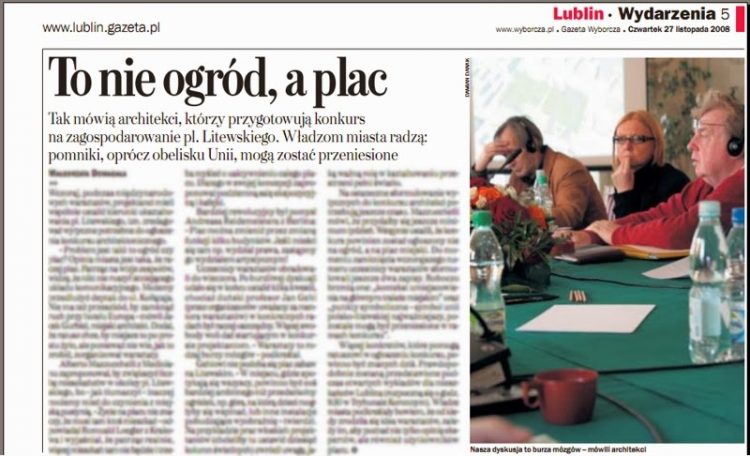 The article concerned different ideas for the square, which were created by the international participants completed the day before (an announcement of the workshops: ‘What will the architects propose?’, Małgorzata Domagała, “Gazeta Wyborcza”, 04th of October 2008). The ideas and the arrangements were meant to help the city authorities in the preparation of rules for a competition for the design of the square. During the ‘stormy discussion’ the architects came to some arrangements, though Jan Gehl regarded as a mentor of the workshops was rather careful in giving advice, in order to give more freedom to the participants of the future competition:

‘The workshops are a kind of brainstorming – he emphasized. Gehl does not like the existing playground on the Litewski Square – in a place where everyone come together, there should be something more ambitious than a nursery garden, such as a mountain which children could climb, or other installations that spark imagination – he said. Using the work of the Italian group (they would like to arrange the square with ten lighting columns) he pointed out how important role in shaping the public space is light.’

The workshops were ultimately a form of creative ‘consultation’, which have brought some recommendations, presented on the day of publication of the article on public lectures at the Koronny Tribunale, or later in form of an exhibition in front of the City Hall showing the ideas of the guest designers as sketches and renderings.